Decks and algae don’t go well together, never! On the contrary, algae growth is detrimental to wood decks in so many ways. It weakens the lumber planks, promotes rotting, is unsightly, and can cause injuries, among others.

Algae has become something of a pervasive problem in modern society as many people build homes with decks, patios, and even water piers. For the above reasons, I’ll enlighten you on how to remove algae from deck in concise but informative language.

There are countless algae species worldwide, running into millions, but the removal method from decks is mostly the same across all the species. Removal primarily involves using chemical-based cleaning agents like vinegar, sodium bicarbonate, borax, trisodium phosphate, and bleaches. Non-chemical removal methods involve the use of water in the superheated form.

After removing algae successfully, ensure you clean your deck regularly to forestall future growths. It is also good to carry out regular deck-maintenance practices such as yearly restains and repairing defective planks. In other words, algae removal from decks requires a holistic approach for the process to come to fruition.

Importance of Removing Algae From Deck

Algae also soak moisture into lumber, making it weak; this compromises the entire deck’s structural integrity and durability. If you get rid of algae and observe routine

deck-maintenance practices, the wood will last longer and serve you better.

It Makes the Deck Maintain its Appeal.

The sight of algae on any surface is unsavory, and when it comes to wood decks, it’s worse as it totally messes with its glamor. It is essential to remove algae and clean the deck regularly to maintain its new and attractive look.

Algae is often very slippery! A deck covered with algae predisposes people to accidental slips that cause severe injuries and hospitalizations. These are avoidable consequences so long as you rid your deck of algae early enough.

Algae is infamous for spreading very fast on wood surfaces. When you spot any sign of algal bloom on your deck, you should nip it in the bud to prevent further spread. When left to spread on decks, algae is difficult to get rid of, calling for the entire deck’s replacement, which is expensive.

As cliche as it may sound, prevention is still better than cure. Therefore, it’s important to know the conditions that stimulate and foster algal growth on wood to take the necessary preventive measures.

The appearance and proliferation of algae are fostered by various environmental factors that at times work in tandem. These factors include sunlight, temperature, moisture, wind, and nutrients.

By and large, algae thrive in warm temperatures of between 25°-30°C though some species grow optimally at 12°-15°C. Temperature is a quantity that is contingent upon seasonal changes; warm seasons encourage algal growth while wintry seasons are less conducive.

Warm temperature is a matter of nature, and nothing can be done to prevent it from occurring; instead, you should be more vigilant in cleaning your deck when it’s warm to avert algae, mold, and mildew bloom. 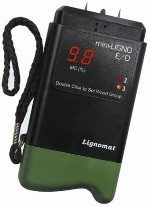 Moisture is one of the most important environmental factors that promote algal growth on decks. Wherever there is moisture, it is almost a surety that algae will follow.

Rainy weather systems and highly humid environments lead to the dampening of wood, which attracts algae, mildew, and mold. Ensure your deck is always dry to prevent water from seeping into the lumber.

Algae require sunlight for survival; sunlight is its chief energy source, and with adequate supply, the algae will increase very fast on your deck. It’s important to note that algae require only minimal amounts of sunlight for optimal growth; high-intensity UV rays deprive the organism of water, thus hindering its spread. Therefore, even a shade or indirect sunlight is just enough to stimulate algal growth.

Sunlight is a natural phenomenon that we can’t control, so the only remedy is maintaining routine deck management practices; this will ward off algae and mildew emergence.

Algae produce spores! These spores spread to various environments, at which point algae starts growing. The primary dispersal vehicles for the spores are wind, other organisms, and water. Therefore, windy environments will bring and deposit algae spores on your deck to jumpstart their growth. Again, the wind is a natural phenomenon over which we have no control, so the best practice is always to keep your deck clean.

White vinegar is generally used in households to clean surfaces. Vinegar has an acidic PH that does not allow algal growth. It also has degreasing and anti-mold properties. However, if vinegar is used alone, it will kill algae but also corrode and damage your wood deck. Therefore, you should dilute vinegar before using it to clean off algae from your deck. Mix in the ratio of 1 part vinegar with 1 part water and spray on the deck surface with a pump sprayer or a hand sprayer; you can purchase these sprayers from a local hardware shop.

Vinegar also works well when mixed with semi (not ultra) liquid dish soap! One teaspoon of the latter is added to two gallons of water/vinegar solution.

Do not mix vinegar with bicarbonate of soda as the two cleaning agents chemically-react with each other, decomposing in the process to form water and carbon dioxide, making it ineffective.

This cleaning agent is commonly known as baking soda; it is used to remove corrosion, paint, mildew, and algae in a process called soda blasting. The cleaner is used on softer surfaces such as timber, copper, or aluminum, which are damaged by silica sand grinding media. The blasting system comprises a gun that is hooked up to a standard air compressor and a pick-up tube inserted into a baking soda reservoir. This system blows sodium hydrogen carbonate against wood surfaces to remove mold, mildew, algae, and paint, leaving behind a clean deck.

This chemical is highly effective at removing algae, fire, or smoke-damaged-surfaces, and some of them are scented to get rid of unpleasant odors on wood surfaces.

To emphasize, don’t mix baking soda with vinegar as they will react to form an acid that subsequently decomposes to water and carbon dioxide, effectively making your cleaning agent useless.

Oxygen bleach is a chlorine-free cleaning agent used to control algae and mildew growth on decks, as well as in-house cleaning tasks. It is less effective at removing algae and cleaning off stains compared to its chlorinated counterpart, but it is environmentally friendly and does not eat away lumber planks. Oxygenated bleach is also not toxic to humans.

Since this agent is less effective at clearing established algae on decks, it is more impactful when used preemptively. Preemptive use means you use it regularly to clean your wood deck before algae start growing.

If you are planning to use this bleach, buy it when your wood deck is still new or when it has been stripped and restained or repainted. Dissolve 1 cup of oxygenated bleach in 1 gallon of water, apply on the deck and scrub with a brush.

Chlorinated bleaches are found in several “bleach” products used in households and institutions like hospitals and water-chlorination plants. These products vary in grades which are expressed as active percentage chlorine.

These agents are mainly used to clean hard surfaces like wood decks and to whiten laundry. Chlorinated bleaches for algae removal come in two forms:

This agent is known commonly as “bleach”; it comprises sodium hypochlorite dissolved in water. It is among the most widely-available cleaning agents and is found in every convenience

Pour the product directly on the deck or patio region containing algae, use a broom or a brush to scrub the surface, then rinse thoroughly with water, preferably from a hosepipe.

Bleaching powder, also referred to as chlorinated lime, is a three-in-one agent consisting of slaked lime, calcium chloride, and calcium hypochlorite in various proportions. This cleaning agent is sold in tablets or a white powder and has similar applications to liquid bleach. The advantage bleach powder has over liquid bleach is it has better stability and has higher chlorine availability.

It is important to note that bleaches cause fading or decolorisation of certain kinds of wood like cedar. It is thus vital for you to research and even consult before applying bleach on your deck.

The drawback of chlorine-based bleaches is they are toxic and corrosive. When using these products, ensure your working environment is well ventilated to avoid respiratory irritations from chlorine inhalation. Also, wear protective gear like hand gloves when handling bleach to avoid skin exposure. 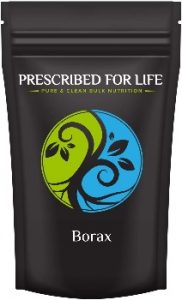 Borax is also called sodium borate or disodium tetraborate; it is a constituent of several household laundry & cleaning products. This agent is used to remove algae, mold, and mildew and prevent future growths on wood. Sodium borate is also a strong antifungal compound and a fire retardant, reducing timber’s flammability for improved safety.

The chemical has deodorant properties to remove unpleasant smells on wood surfaces, and it is also used for woodworm treatment. For woodworm treatment, sodium borate is diluted in water and sprayed on infested wood to kill the wood-eating larvae of beetles. All of the above-added benefits make borax an all-purpose cleaning agent for improved versatility of use.

When using borax to clean wood decks, combine it with water in the ratio of 1 cup borax to 1 gallon of water, then stir well. Apply the resulting solution on the deck surface as you scrub with a brush to remove the algae.

You can buy Borax Here: 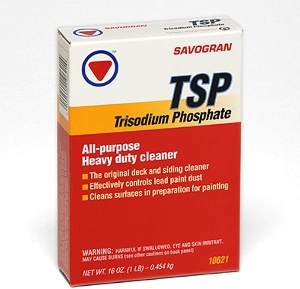 TSP is an inorganic substance used as a stain remover, cleaning agent, and degreaser; it is also called sodium phosphate. The pH of a !% TSP solution is 12 (highly basic), which provides a hostile environment against algae, mildew, and mold bloom. TSP’s basic pH is excellent for cleaning up grease or oil-stained surfaces, especially when TSP is combined with surfactants.

This chemical has low manufacturing costs, giving you a pocket-friendly alternative for algae removal. When used in combination with chlorine bleach, the cleaning agent is effective at removing mildew and algae but less so on mold.

The only downside is that TSP causes contamination of rivers and lakes when it gets into a water system; this process is called eutrophication.

You can buy TSP Here:

Here, water is heated to a very high temperature to achieve a superheated state. This superheated form is known as a dry steam vapor, which is a highly effective cleaning agent as it can penetrate the micropores and crevices on your deck. The steam works by first killing algae and mildew then weakening the adhesive bonds that anchor the growths to the wood. It, therefore, removes algae, mildew, and stubborn stains that are deeply embedded in the wood.

This technology leaves behind a deck surface that is dry, clean, and disinfected. It is also an environmentally-friendly method as it has no chemical additives, just vaporized water.

The only flaw is this technology consumes a lot of electric energy to heat up the water.

Ridding decks of algae is a process that requires a calculated approach for perfect execution making it important that you know how to remove algae from deck. You cannot clear algae off of your deck by simply taking a broom and sweeping! Neither can you just repaint or restain over existing algae on surfaces. The best practice is to eliminate the algae using the established and science-oriented methods as discussed in this article. If you apply the wrong methods, you run the risk of getting a resurgent algal growth that is worse, and you may end up damaging your timber planks in the process.

In that regard, I urge you to follow the above tips and exercise them with due diligence, and your deck will remain algae-free for ages. I’m obliged to inform you that algae removal is a little tedious at the first attempt as it tends to adhere firmly to surfaces. Once you’re done with the initial clearing phase, the successive preventative measures are easy to effect. Good luck!